Message from the President

Welcome to AIJA Matters, our bi-monthly update for AIJA members. We have recently promoted these two AIJA initiatives – the resources on coercive control and the 2022 AIJA Indigenous Youth Justice Conference– to all heads of jurisdictions, law societies and bar associations. We received excellent feedback from the National Judicial College on the Domestic & Family Violence Bench Book, with the CEO Kate Latimer kindly saying judicial officers had “discover[ed] for themselves how invaluable a judicial tool it is” during the College’s one-day program on family and domestic violence. There has also been strong interest from two bar associations and a law society.

Coercive control in some ways is the invisible part of domestic violence but it can be the most dangerous in terms of emotional harm. It can escalate into very dangerous situations and create difficult problems to overcome in court. Following the AIJA’s publication of the National Domestic & Family Violence Bench Book (Bench Book), the AIJA received funding from the Commonwealth Attorney General’s Department to undertake consultation and promotion of the Bench Book, including regarding content on coercive control. Professor Heather Douglas conducted this project and the report and resources designed to facilitate judicial education about coercive control are now available on the AIJA website here.

In collaboration with the Law Society of New South Wales, we are pleased to present the 2022 AIJA Indigenous Youth Justice Conference to be hosted live in Sydney, on Saturday 29 and Sunday 30 October 2022. Indigenous justice is one of the AIJA’s strategic priority areas, and since 2002 the many complex issues involved in Indigenous justice and youth justice have been examined in the AIJA’s conferences. Improving this situation is something I feel strongly about. I’m confident that the AIJA Indigenous Youth Justice Conference – the first conference we have been able to hold in-person since 2019 – will inform meaningful conversations about potential ways to help reduce over-representation of Indigenous youth in detention and improve Indigenous youth justice outcomes. You can register to attend the conference here.

In other news, I would like to congratulate AIJA Council Member, Dr Brenda McGivern, on her recent appointment as Principal Registrar, District Court of Western Australia and Ms Una Doyle on her appointment as the Chief Executive of the Judicial Commission of New South Wales.

I would also like to congratulate AIJA Council Member Annmarie Lumsden for winning the Terry Keaney Award this year.

I also remind you that membership renewals are now open and close on 30 September 2022. The AIJA relies on your membership to continue its work in providing the highest quality research, conferences and other thought leadership promoting excellence in the administration of justice in Australia, New Zealand and the region. You can renew your membership here.

I hope you enjoy this issue of AIJA Matters.

Coercive control
The National Domestic and Family Violence Bench Book (NDFVBB) is a publicly available online resource for judicial officers considering legal issues relevant to domestic and family violence-related cases. The NDFVBB will contribute to harmonising the treatment of these cases across jurisdictions along broad principles and may assist judicial officers with decision-making and judgment writing. It provides background information and knowledge supported by research, links to a range of legal and related resources, and practical guidelines for courtroom management that judicial officers may consult when considering the breadth of issues and the appropriate course of action in any individual case.

The NDFVBB has been in operation since 2016 and is updated annually. In 2020, Professor Douglas and her team at University of Queensland conducted a review of the NDFVBB and suggested adding a section specifically addressing the concept of coercive control in greater detail.

In 2021, the Commonwealth Attorney General’s Department provided funding to the AIJA for an additional project on coercive control. The AIJA engaged NDFVBB author Professor Douglas and researcher, Ms Hannah Ehler, to undertake the project, with the support of a specialist advisory committee comprised of members of the judiciary experienced in the area of domestic and family violence.

They conducted interviews with 28 judicial officers and five research experts to identify the areas of information needed by judicial officers to better understand coercive control. Following that consultation, Professor Douglas and Ms Hannah Ehler produced a report: Coercive Control and Judicial Education: A Consultation Report. Based on that report, and with input from the AIJA’s specialist advisory committee, Professor Douglas and Ms Greta Robenstone produced the following resources to facilitate judicial education about coercive control:

The report and supporting educational resources are available on the AIJA website here.
The consultation has informed the most recent edition of the National Domestic and Family Violence Bench Book, in particular section 3.2 ‘Coercive control’ 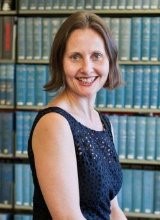 Brenda has a PhD in Law and is a nationally accredited mediator and a Vincent Fairfax Fellow, having graduated with a Fellowship in Ethical Leadership in 2021. Before commencing with the District Court on 6 July 2022, Dr McGivern was a Member with the State Administrative Tribunal, working principally in the Civil and Commercial and Human Rights steams of the Tribunal.

Brenda has made many significant contributions to the AIJA since she joined in 2018, including serving on the Council for most of that time and participating in our 2020 conference “Providing Justice in a Viral World – Where to from here?”.

In talking about why the AIJA’s work is so important, Brenda said: “The promotion of fair, transparent and efficient Court processes is an essential component of facilitating access to justice”.

In addition to her work with the AIJA, she has chaired the Paediatric Clinical Ethics Service for the WA Child and Adolescent Health Service since 2020.

Advocating for access to justice in remote communities
The work of the Chief Judge of the Northern Territory Local Court, Elizabeth Morris, recently made the news in a feature article by the ABC.  Chief Judge Morris, who is also an AIJA Council Member, used the opportunity to highlight the need for well-resourced interpreter services, prosecution services and at least two legal aid agencies for the bush court to ensure people in remote communities have access to justice. One of the issues highlighted was that the NT Legal Aid Commission, which has previously defended clients when the North Australian Aboriginal Justice Agency identifies a conflict of interest, had stopped accepting new remote clients due to funding arrangements. At the end of the article, the NT Attorney-General Chansey Paech said he was “currently seeking urgent funding to ensure the NT Legal Aid Commission can resume bush court services as soon as possible”. The NT Attorney-General is also a speaker at the 2022 AIJA Indigenous Youth Justice Conference.

Tony McAvoy SC, AIJA Board and Council Member, was a member of the Advisory Committee for the ALRC report.

You can register to attend and submit questions to the panel here.

Terry Keaney Award winner
Congratulations to AIJA Council Member Annmarie Lumsden for winning the Terry Keaney Award this year. Annmarie is the Director of the Northern Territory Legal Aid Commission and a former Director of Criminal Law at Legal Aid NSW. The award is for dedication to the profession, excellence as a criminal defence lawyer, commitment to clients and concern for social justice. The award is named in memory of a barrister who embodied these qualities.

A key element of this project is stakeholder engagement. As a readily available online resource, the bench book will include useful and up-to-date information for stakeholders, especially lawyers and judicial officers, to help develop greater cultural competency throughout the system. It will include extracts of important cases, summaries and links to relevant research, and information to challenge any myths, stereotypes and biases that may be held by practitioners and members of the judiciary.

The project team is currently preparing a workplan for government and progressing toward establishing an Advisory Group for the project that will include Aboriginal and Torres Strait Islander members of the legal profession and members of the judiciary.

We will continue to provide updates on this important project as we progress it.

The AIJA, in collaboration with the Law Society of New South Wales, is proud to present the 2022 AIJA Indigenous Youth Justice Conference. It will be hosted in a hybrid format from Saturday 29 to Sunday 30 October 2022 at Dockside Darling Harbour, Cockle Bay Wharf.

In Australia, half of the children (aged 10–17) in detention are Aboriginal and Torres Strait Islander people. They are grossly over-represented.

Acknowledgement of this serious issue is not a new thing. The AIJA has been attempting to address the issue in its Indigenous justice and youth justice conferences since 2002.

With an impressive line-up of esteemed panellists and speakers, the conference promises to be illuminating.

More information about the conference can be found on our website here.

Australian Academy of Law, Australian Law Journal and the AIJA – Joint Conference
As a reminder for your diary, on 8 – 10 September 2023 we are holding a 2½ day joint event with the Australian Law Journal (ALJ) and the Australian Academy of Law. The conference marks some important national legal bicentenaries, including the Third Charter of Justice promulgated on 13 October 1823, establishing the Supreme Court for New South Wales, and, for Tasmania, the first sitting of the Supreme Court of Van Diemen’s Land on 10 May 1824. We thank Justice François Kunc for this initiative and acknowledge the work of the committee, which includes AIJA representative, Justice Steven Rares.

In this section of AIJA Matters, we curate highlights of recent judicial administration news and insights from local and global sources.

Without Fear or Favour: Judicial Impartiality and the Law on Bias (ALRC Report 138)
On 2 August, the Attorney-General of Australia, the Hon Mark Dreyfus QC, tabled in Parliament the Australian Law Reform Commission’s (ALRC) recent report on judicial impartiality on 2 August 2022.

In the report, the ALRC made 14 recommendations to promote and protect judicial impartiality and public confidence in the Commonwealth judiciary. These included procedural reform, published guidance for litigants, establishing a Federal Judicial Commission as an additional and accessible oversight mechanism and strengthening institutional structures.

You can download a copy of the summary and final reports here.