Note from the Executive Director

In this edition of our newsletter we highlight the AIJA’s activities in education and research.

The recent online conference series, Providing Justice in a Viral World – Where to from here? developed by the AIJA Education Committee and delivered in collaboration with the Law Society of New South Wales is a collection of valuable insights and experiences. Over five sessions the audiences had the benefit of hearing from a wide and impressive range of speakers from a variety of roles in the administration of justice, across various jurisdictions in Australia and New Zealand.

The other offering, a webinar hosted by the Executive Committee of the International Consortium for Court Excellence, called: ‘International Framework for Court Excellence (Third Edition): Responding to challenges in a pandemic’ proved extremely popular and was an excellent opportunity to hear from speakers with intimate knowledge of the framework and its application.

Given the success of both ventures we plan to provide more educational offerings like this is the future.

Our newsletter also provides an overview of current AIJA research projects. While the disruptions of COVID-19 impacted progress of work, we are looking forward to sharing the results of these worthwhile initiatives in the months to come.

On another note, you will have received the notice for the AIJA’s 2020 AGM which this year, given travel restrictions, will be held online via Microsoft Teams. Details are also included in this newsletter. If you wish to attend, please register so that a meeting link may be sent to you.

In our next newsletter, the President will provide an update on the AIJA 2021 strategy, the development of which is the culmination of the thoughtful and generous work of the AIJA Council. We look forward to sharing that with you.

The AIJA's Annual General Meeting is to take place on 12 November 2020 at 4:30 pm AEDT, via Microsoft Teams. The Notice of AGM and Agenda can be viewed via this link.

If you wish to attend the AGM or nominate a proxy, please register using this form.

Recent AIJA conference series overview: Providing Justice in a Viral World – Where to from here? 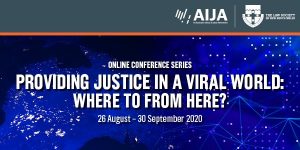 From August 26 to September 30, the AIJA hosted 5 evening webinars addressing the pandemic’s impact on the administration of justice. Our first session examined lessons learned from the use of technology in online courts, which our second session expanded by considering the sociological and neurological impacts of these online proceedings. In our third session, we heard from those behind the scenes, listening to the insights of court administrators and technology providers. Drawing on those lessons, our fourth session turned to consider how the principle of open justice has been affected. In our final session, our panellists discussed the future of judicial administration after COVID-19, focusing on the most valuable changes and the principles that should be followed when implementing new best practices.

Throughout our sessions, cooperation emerged as a crucial driver of more successful responses. To plan change, New Zealand formed cross-sector working groups which ensured responses to COVID-19 were consistent throughout the justice system. When implementing changes, ‘champions’ within Australian courts were credited with enabling success and assisting fellow judicial officers, and the extensive support of court staff in all jurisdictions was well appreciated. Many panellists noted that in hearings, the beyond-normal cooperation of parties allowed courts to function as best as possible, responding flexibly where required.

The movement to online courts has the potential to increase access to justice, particularly for community members who face serious difficulties in attending physical hearings. However, it also presents serious challenges to other vulnerable members of society.

Self-represented litigants, often already disadvantaged, can often feel as if they are not heard in online proceedings. This is accentuated if they do not have the required technology to appear. To support them, registrars noted the importance of taking time to ensure litigants feel heard and to more explicitly signpost proceedings. Some judicial officers noted that if there was a technological imbalance between parties, they would request both parties agreed to appear on an equal footing, using the same technology. Alternatively, the Singaporean approach of creating ‘zoom rooms’ in Courts to allow remote appearances from litigants who lack technology was also suggested.

Neurologically or cognitively challenged individuals require special support in online courts. While judicial officers may be able to perceive issues in understanding in person, online courts prevent many non-verbal cues from being communicated, and previously understood behaviour may manifest as aloofness, rudeness, or indifference in remote proceedings.

Planning for the future

Audience members frequently enquired about the panellist’s views on the future of courts. The most common suggestion was that brief matters (usually interlocutory matters) may be appropriate for the online environment. It was suggested this would be driven by client-side budgetary concerns, efficiency considerations by the profession, and by the positive experience of the judiciary with these matters, which lend themselves to remote settings. Those panellists asked about contentious matters all cautioned against contentious matters being heard online, emphasising the importance of physical proceedings in such matters. This is particularly important in the assessment of witness credibility and jury trials.

Notwithstanding their different expectations, panellists agreed it was critical to ‘get it right’.  For instance, The District Court of NZ has returned to pre-pandemic practices post-lockdown as they review their online experience, aiming to ensure their new practices adapt the best of online courts.

Thank you to everyone who attended the conferences or who purchased passes to view the recordings online – we were delighted to be joined by you and hear your questions! If you missed the conference, you can still purchase a conference pass online and view either individual or all the session recordings here.

The most recent update on the project, the National Statement, can be viewed here.

The project focused on perpetrator interventions that are available to courts to address DFV, namely:

This project examines how children and young people in the Victorian criminal justice system are represented by the media. It also examines opportunities for the Children’s Court of Victoria in relation to social media and digital technologies.

The project’s literature review is nearly complete, and while fieldwork has been delayed by COVID-19, the project is accordingly expanding to introduce COVID-related elements.

This project introduces Aboriginal Community Justice Reports to Victorian Koori Courts, using a participatory action research model to assess the impact of these reports in criminal sentencing practices and outcomes.

Professor Thalia Anthony has advised that the project is progressing well, with the trial of Indigenous Justice Reports now taking place in both the Koori Courts and the Criminal Division of the Victorian County Court. We expect a report shortly and are eager to hear how this project can inform sentencing practices.

Access to Justice in interpreted proceedings: the role of Judicial Officers

This project studies judicial officers during interpreted proceedings, with an interest in those involving emerging language groups and Indigenous languages. It measures behaviours against the National Recommended Standards and compares proceedings to international courts, aiming to improve outcomes for non-English speaking participants.

Professor Ludmilla Stern and her team were fortunate enough to conduct fieldwork at the ICC and MICT in The Hague before COVID-19 prompted court closures. Their domestic fieldwork is ongoing, with access to the Local and District Courts of NSW, and focus groups with interpreters of ‘new and emerging’ languages beginning.

This project studies criminal cases involving unrepresented accused adults, identifying key issues for further study. The project team has finished their literature review, nearly completed their interviews, and expect to have a final report at the end of the year.

The webinar also celebrated the successful launch of the 3rd Edition of the IFCE this year. The IFCE 3rd Edition evolved the IFCE by introducing new topics (Court Leadership, Strategic Court Management, and Court Workforce), simplifying the self-assessment process, and improving the scoring methodology. All speakers commented on the increased usefulness of the International Framework for Court Excellence (IFCE) during periods of rapid upheaval and change. Repeated references to features of the 3rd Edition suggest its publication was well-timed to assist courts weather the storm of COVID-19.

Chief Justice Ingram attributed the IFCE with creating a culture of continuous improvement in the judiciary of the Marshall Islands, which allowed them to respond to the impacts of the pandemic. As the Marshall Islands has a significant number of international litigants and judicial officers based in the United States, they were disproportionately affected by travel restrictions, but were able to quickly adapt.

Deputy Presiding Judge Marie spoke to the increased focus that the 3rd IFCE Guide places on the workforce of the court. The resilience of Singapore’s State Courts was driven by a focus on the staff ‘behind’ the judicial officers, where increased team solidarity, technological training, and splitting team operations allowed them to continue effectively throughout the pandemic. Accordingly, Judge Marie emphasised that the IFCE’s focus on these staff provides valuable insights which allow courts to improve their performance as efficiently as possible.

Daniel Hall provided ‘6 Principles for Post-Pandemic Court Technology’, noting that when courts implement new technology or procedures, they should establish practices which record as much data around their implementation as possible. By doing so, courts will be able to draw upon as much information as possible when assessing new practices in the continuous improvement cycle which the IFCE implements. He also pointed to the establishment of ‘rapid response teams’ which considered the perspectives of internal and external stakeholders when forming pandemic responses as being critical to their success.

Beth Wiggins explained the 3rd Edition’s new scoring approach, demonstrating how the new system increased the accuracy and usefulness of results. The introduction of an ‘Effectiveness Statement’ for each area of court excellence directly measures performance, and the new ‘Don’t Know’ response option allows data analysis to be performed on the most relevant responses, with the added benefit of allowing courts to measure their internal communication. The importance of treating the IFCE as an iterative process was also stressed, with attendees reminded that the IFCE cannot be used to compare different courts, as it can only measure a single court’s relative performance over time.

Members of the AIJA have been kindly invited to attend an afternoon symposium on legal interpreting, hosted by Professor Ludmilla Stern and the other members of our ARC linkage project. The symposium will introduce the project, discuss policy, changes in practice, and hear from interpreters, before closing with a panel discussion on whether judicial officers adhere to the Recommended National Standards for Working with Interpreters in Courts and Tribunals.

The symposium will be held via Zoom on December 4 between 1:30-5:00 pm (AEDT). The program for the symposium, which includes a registration link, can be accessed via this link. Given limited numbers, the organisers have suggested that 25 AIJA members may attend, but more places may be available if required.

The Australasian Institute of Judicial Administration (AIJA) is an approved Research Institute for the purposes of the Income Tax Assessment Act 1997 (Cth). In addition to supporting our work, a donation to the Research Fund will facilitate research by the AIJA relating to judicial and court administration. Donations of $2 or more are tax-deductible for Australian tax payers: ABN: 13 063 150 739. Your support will be gratefully received and acknowledged.

Donations can be made on the AIJA website at https://aija.org.au/support-aija-research/.

The AIJA is active on Twitter at @AIJAJudicial and on LinkedIn. This is the quickest and easiest way to see what we're up to and to keep engaged.