MESSAGE FROM THE PRESIDENT

It is difficult to believe we have already reached the month of May, and the AIJA has had a busy and interesting year so far.

Firstly, I am delighted to acknowledge members of the AIJA Council for whom there have been important and worthy appointments in the past few months:

On behalf of the AIJA Council, I congratulate these members. The Council is grateful to have the benefit of the experience of such senior members of the judiciary and the broader profession.

I would also like to acknowledge Council member and co-convenor of the Indigenous Justice Committee, Judge Dina Yehia SC, who is heading up the new Walama List in the District Court of New South Wales. The list, which is aimed at reducing high rates of Indigenous incarceration and reoffending, and which began as a pilot in November last year, was formally acknowledged in a ceremony on 4 April 2022. Judge Yehia, along with others, has worked tirelessly on this important initiative and I am looking forward to hearing about its progress.

In March I had the pleasure of presenting the AIJA Award for Excellence to Court Services Victoria (CSV) for its valuable ‘Self-Determination Plan’ The Plan sets out the expectations of CSV to create a Koori inclusive environment for staff, Koori agencies and the Koori Community in Victoria. The award was accepted on behalf of Court Services Victoria by the Chief Justice of Victoria, the Hon Anne Ferguson. Further details of the event are provided here.I would like to express our gratitude to the President of the New South Wales Court of Appeal for hosting the 10th AIJA Appellate Judge’s Conference on 21-22 April 2022. Any papers that are made available from the conference will be posted on the AIJA website.

On 30 April, three judicial members of the AIJA made a substantial panel presentation to the Australian Bar Association Conference. The panel comprised the Hon. Janine Pritchard (chair), President, State Administrative Tribunal of Western Australia, The Hon. Sally Fitzgerald, Judge of the High Court of New Zealand and Judge Dina Yehia SC, Judge of the District Court of New South Wales on ‘Views of remote advocates and advocacy from the Bench’. I congratulate those members of Council and Board member Dr Matt Collins AM QC, President of the ABA on an excellent session and conference. In terms of the months ahead, I am very excited about the AIJA Indigenous Youth Justice Conference, which will take place on Saturday 29 and Sunday 30 October 2022 in Sydney. The AIJA Annual General Meeting will be held on Friday 28 October and the Board is keen for this weekend to be an opportunity to gather in person after such a long absence. Further details about the conference will be available shortly, and it promises to be a program of timely and interesting discussions on critical matters relating to Indigenous youth justice.

I look forward to meeting as many of our AIJA members there as possible. Finally the AIJA’s immediate past President, the Hon. Justice Steven Rares is representing the AIJA on the steering committee of an event being planned with the Australian Academy of Law and the Australian Law Journal to take place 8-10 September 2023 to celebrate 200 years of the New South Wales and Tasmanian Supreme Courts.

We look forward to the program unfolding. You may wish to save the date in your 2023 calendar.

I hope you enjoy this edition of the AIJA Newsletter. 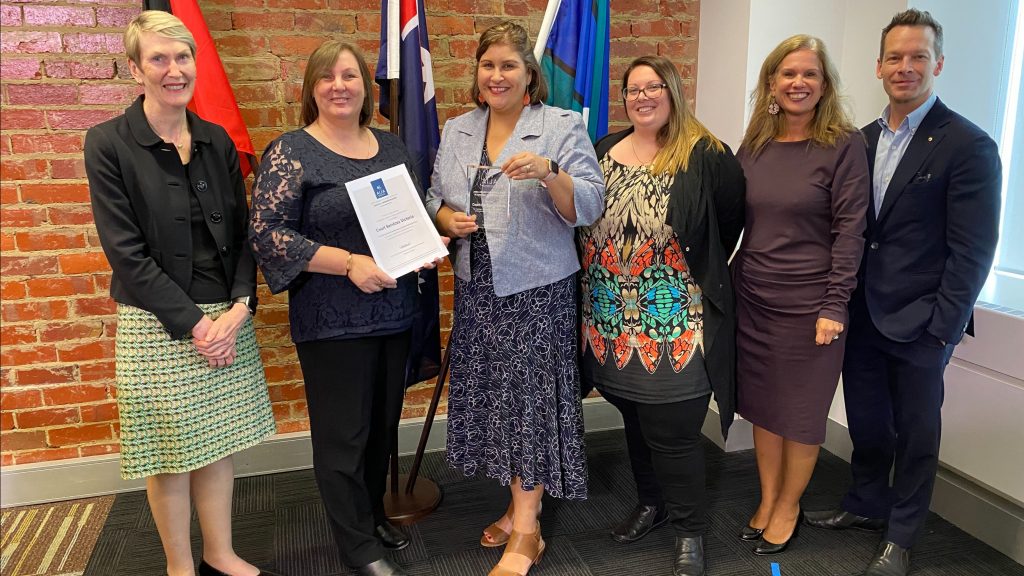 The Award for Excellence was created in 2002 to celebrate 25 years of AIJA’s establishment. It recognises members and organisations that have made an exceptional contribution to the administration of justice in Australia and New Zealand.

The 2021 award winner was Court Services Victoria for the development and implementation of their 'Self-Determination Plan 2021-2025' and an award ceremony was held on Friday 19 March 2022. READ MORE

The Walama List, which aims to reduce Indigenous incarceration and reoffending, by providing Indigenous offenders with a more culturally specific sentencing process was marked with an official ceremonial sitting in the NSW District Court on 4 April 2022.

The Walama List will be headed up by District Court Judge Dina Yehia SC, who is also a member of the Council of the AIJA. To view the Ceremonial Sitting, please click to watch.

The AIJA at the ABA's National Conference
Re-Emerge 2022

On 30 April 2022, the AIJA proudly presented a session at the Australian Bar Association’s national conference, Re-Emerge 2022, held in the State Library of Melbourne. It was the first gathering of the national bar since March 2020.

The Hon. Justice Janine Pritchard, President of the State Administrative Tribunal of Western Australia, expertly moderated a panel discussion with the Hon. Justice Sally Fitzgerald of the New Zealand High Court and Judge Dina Yehia SC of the District Court of NSW, entitled ‘Views of Remote Advocates and Remote Advocacy from the Bench’. In a lively discussion, their Honours gave their perspectives on what has worked well, and not so well, in their experiences of watching remote advocates over the course of the pandemic, and gave tips for barristers to make their remote advocacy more effective. The discussion sparked a large number of questions from those present, about the relative advantages of standing compared to sitting, maintaining formality in the virtual courtroom, engaging with the bench, protecting against third party interference with witnesses and the need for training to appear on the small screen as opposed to the stage of the courtroom.

As Dr Matt Collins AM QC, President of the ABA and member of the Board and Council of the AIJA put it in thanking the panel, “feedback from judges about the effectiveness of advocacy is gold. We have all been aware of the absence of visual cues and the subtle changes in tone of voice that are lost through remote advocacy, and so it was fascinating to have a cross-jurisdictional perspective from such a distinguished panel.” To much nodding and approval, he went on to suggest a future counterpart discussion for the judiciary: views from the Bar table of remote judges and the management of hearings! 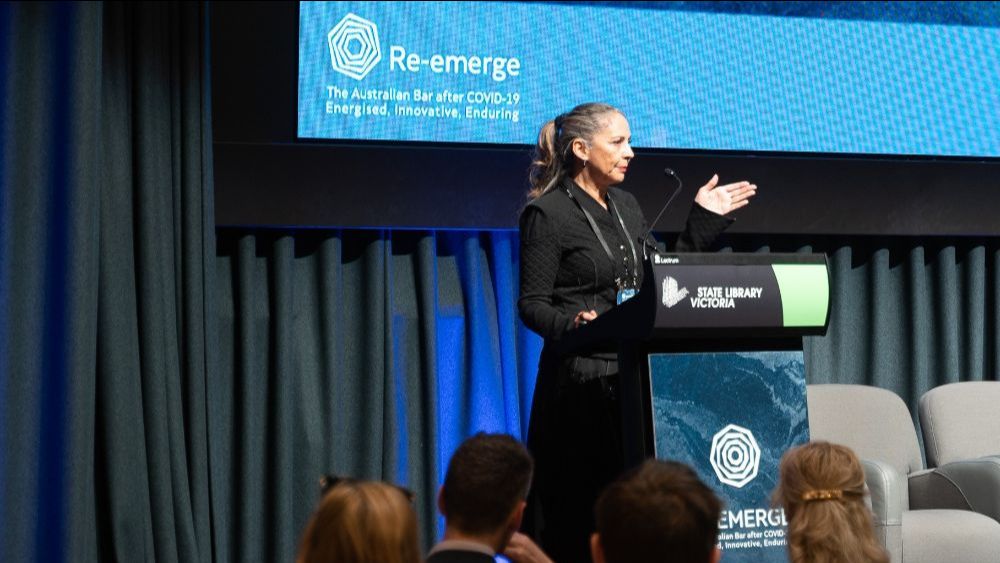 Join us for the AIJA's 2022 Indigenous Youth Justice Conference in October as esteemed panellists and speakers focus on a range of topics including:
•         Age of criminal responsibility
•         Brain Development and Intergenerational Trauma
•         Significance of culture to well-being, healing and rehabilitation
•         Bail Laws
•         Gender Diversity
•         Young people with disability in the criminal justice system
•         And more

The Law Society of New South Wales invites members of the AIJA to participate in the Mock Trail and Mock Mediation competitions as either Mock Trial Magistrates, Mock Mediation Adjudicators or script writers for either competition.   The competitions have been an integral part of the community and provide education style programs aimed at students in years 9-12 with an interest in pursuing legal studies and a legal career.For more information  CLICK HERE

The review was conducted by Dr Helen Szoke AO, a member of the Board of the Judicial Commission of Victoria, with the understanding that courts and the VCAT should work to create a space where sexual harassment and any behaviour adjacent to this act is not tolerated. The review discovered that sexual harassment continued to be under-reported in workplaces, and is still a concept which is poorly understood, overlooked, dismissed, or underestimated. The review had then gone onto make 20 recommendations, focusing on various dimensions present in Victorian courts and VCAT. READ MORE

The High Court of Australia recently published the Justices’ Policy on Workplace Conduct. The policy defines clear standards of appropriate conduct by the Chief Justice and Justices towards all personnel of court, provides a mechanism where adversely affected personnel can raise concerns or make a complaint about inappropriate conduct by a Justice, and sets out a broad framework on how such concerns or complaints will be addressed. This policy is supplementary to all applicable laws and policies and is complementary to the obligations set out in the Work, Health and Safety Act 2011 (Cth). The full document of Justices Policy on Workplace Conduct can be accessed here -  READ MORE

The Law Institute of Victoria recently published an article on the final report on the ‘Inquiry into Victoria’s Criminal Justice System’ which was tabled in Parliament in March. The report is the culmination of extensive consultation with those involved in the criminal justice system, including peak legal bodies. The Law Institute of Victoria welcomed the report which included many recommendations from its own submissions to see a fairer, more rehabilitative justice system.  READ MORE

The Journal of Judicial Administration (ISSN: 0729-2775) is published by Thomson Reuters in association with the AIJA. The articles featured in the Journal are written by leading judges, academics, practitioners and other legal specialists and experts. The Journal is edited by Greg Reinhardt AM, former Executive Director of the AIJA.
The Journal features informed discourse on areas such as:

The AIJA is active on Twitter at @AIJAJudicial and on LinkedIn. This is the quickest and easiest way to see what we're up to and to keep engaged.